Hard drive heads are the most sensitive part of the device. They are responsible for all virtues of modern HDDs, such as read/write speed. However, issues with their functionality represent one of the most common HDD failures.

HDD heads movement is electronically controlled. Their ultra-precise positioning over platters, which rotate with (usually) 5400 or 7200 RPM, is not a simple task from the mechanical point of view. Therefore, HDD head assembly and its functionality is considered as a classic example of successful integration of mechanical engineering solutions with electronics and control. 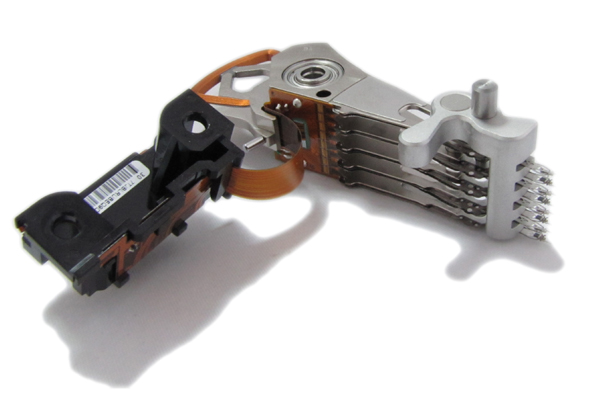 Parts of head stack assembly (HSA) are: actuator arm (which rotates around fixed axle), its bearing assembly, voice coil and its electronics.

Actuator arm (or access arm) are usually made of aluminium alloys, or less often stainless stell or titanium alloys are used. Aluminium alloys are suitable because of their paramagnetic property and their excellent physical characteristics, primarily strength and low specific gravity. Therefore, actuator arm represents robust but easily movable entity.

Head gimbal assembly (HGA) is connected to the actuator arm front end. It consists of thin (≈0.1mm) pieces of sheet metal on which "sliders" are soldered. These sliders, are the most important part of entire head assembly, as they are responsible for performing read/write operations.

Mass of HGA is negligible, so it can hover on "air bearing" above/bellow platters during read/write operations. "Air bearing" is a thin layer of air, which is formed as a consequence of high RPM of the platters.

Height, on which HGA of modern hard drives hovers above/bellow platters, is, depending on exact model ≈ 70nm. It's important to point out that there is constant tendency in HDD development, to additionally decrease this dimension. If high RPM is taken into consideration, it's clear from where danger lurks...

Sliders are low-volume cubes/cuboids, made of ferrite, by which electric signal is transformed into magnetic recording -writing data or vice versa, by which magnetic recording is transformed into electric signal - reading data. Slider surface is aerodynamically designed so "air bearing" features can be used in the best way. Shape of these surface is known as a "pattern" and it differs from model to model.

Common misbelief about HDD functioning is a theory that it is entirely digital device which operates only with binary code. However, the truth is that magnetic recording on the platters is not a digital signal. Head assembly electronics consist of amplifier and A-D converter. Only after analog signal goes through these units, we can speak about digital device and digital signal.

In one of the next blogs, we will write about head assembly actuator and principles of head movement and positioning control.