At the beginning of the presentation, HddSurgery's marketing manager Miloš Gizdovski welcomed our guests from the United States and France and held brief introductory presentation. Firstly, he presented both of our companies - HelpDisc data recovery, as a company which needs and ideas stand behind creation of HddSurgery, firstly as a tool brand and later as completely new company.

He continued with the story about the risks which were carried by usage of conventional, pre-HddSurgery hard drive head replacement methodology. Development of the first HddSurgery tool for Maxtor hard drives, response from DR community and constant work and development of new tools as a result, were the main part of his introductory presentation.

Žarko Damjanović, HddSurgery development engineer, was responsible for the main part of the training. Firstly, he held a presentation regarding CSS hard drives, landing zones parking principle, mutual differences between these hard drives and consequently differences between specific HddSurgery tools used on these HDDs. Miloš Petrović, our project technician, was Žarko’s assistant during the training. 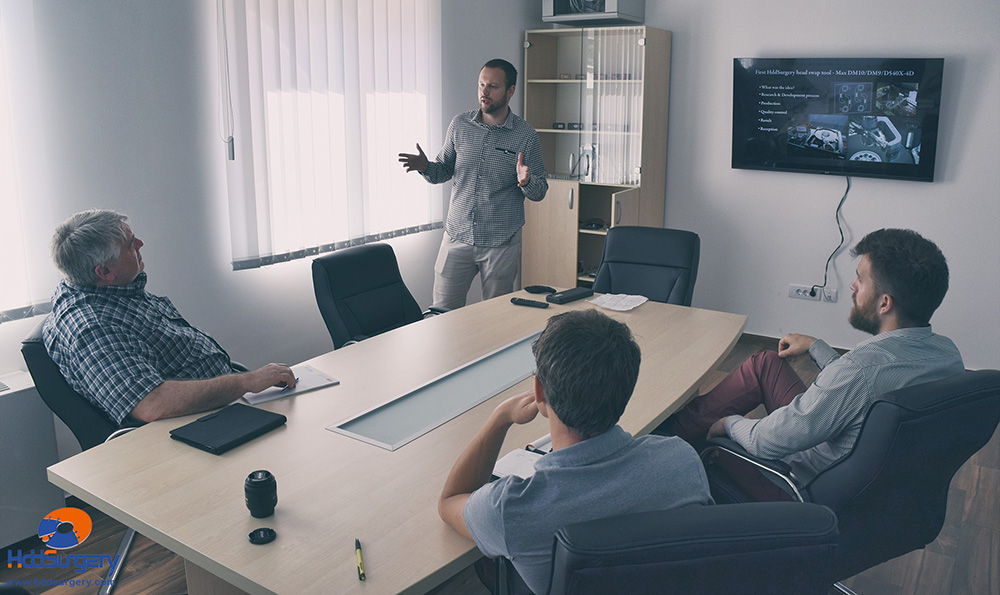 Presentation about hard drive spindle motors, their bearings, functionality, history and development followed. Causes and symptoms of jammed motor issue, one of the most complicated problems in data recovery, are noted and explained. Conventional platter swap methodology is mentioned with all of its imperfections. Risks, flaws and possible problems of platter replacement were underlined.

Then, HddSurgery spindle replacement tool is presented as a unique solution and different approach to jammed motor problem. Live demonstration was performed on real case - jammed motor on ST3500820AS. 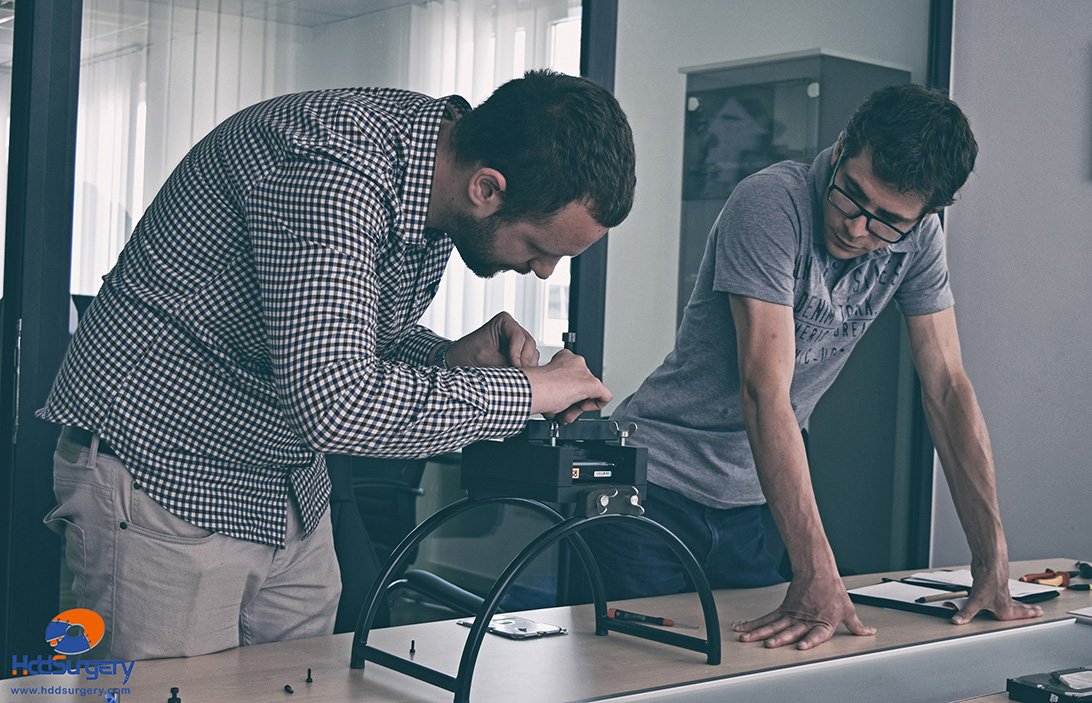 HddSurgery development engineer went through the entire spindle replacement procedure, simultaneously explaining to the attendees the importance and reasons of performing of each step in the process. After the spindle replacement procedure was completed, functional donor bearing was inserted into patient hard drive and glued there. Since some time is needed for glue to dry, the course continued.

Course attendees were then informed about hard drive load/unload (ramp) parking principle and its advantages over CSS technology. HddSurgery ramp tools were presented and the live demonstration of their usage followed. Using our tools, course trainer and attendees went through head swap process, firstly on WD10EARS-00Y5B1 and then on HDS722020ALA330. 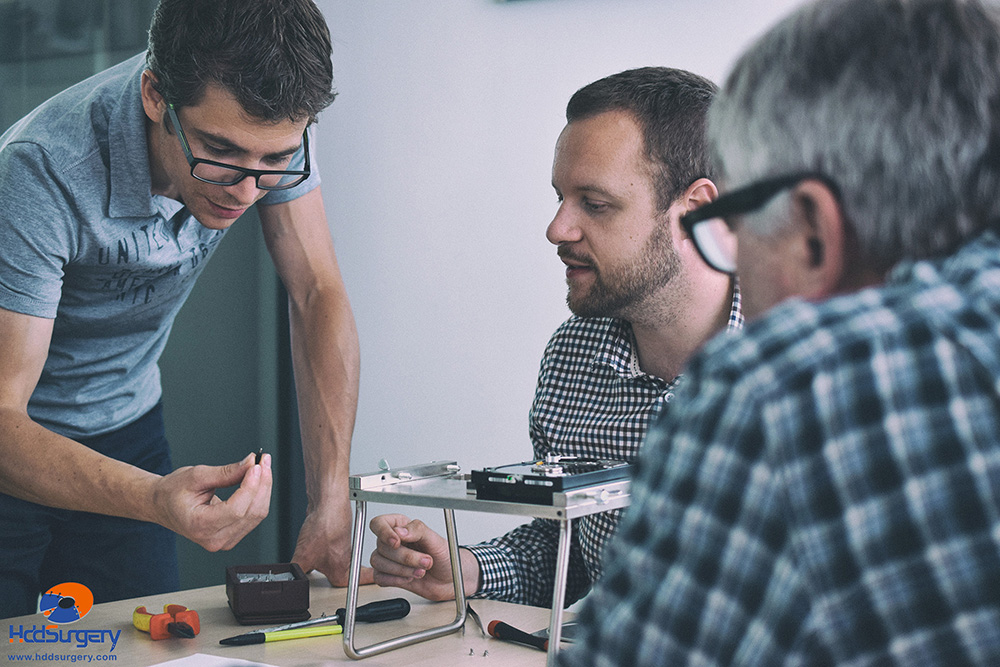 Second hard drive was a Hitachi model with 5 platters and 10 heads. The upper and lower magnet of these drives are connected and can't be disassembled by classical methods. This means that the heads must be disassembled together with the magnets. Support tool secures the position of the heads in relation to both magnets during the heads replacement process.

After this, HddSurgery engineer held another presentation regarding head stiction problem, its causes, appearance and symptoms. HddSurgery solution - head unstick tools and history of their development and use followed.

Live demonstration is performed on a real case - WD30EZRX-00MMMB0 with heads firmly stuck to the platters. Tips & hints for using specific head unstick tools are provided to the attendees. Result of the head unstick operation was - heads are unstuck and safely positioned on the ramp while the platters can spin freely again.

HddSurgery marketing manager concluded the course with the story about ideas for the company's future development and the future of the data storage industry. Some new ideas and projects were presented including HddSurgery Laminar flow clean bench and Clean room project, platter inspection tool, new head combs...

At the end of the training, course attendes had various questions regarding data recovery tools and future company project. HddSurgery’s CEO Nikola Radovanović discussed the company’s projects and what future holds for HddSurgery, HelpDisc and data recovery itself.

That was the end of successful and busy training day. Both trainers and attendees finished it in kafana in Skadarlija, bohemian quarter of Belgrade, enjoying the Serbian cuisine and music.

Hey team! What's the price of the training and can you provide list of training dates for this summer?

@DR Stu Please contact us at support@hddsurgery.com for more information about the training. Regards.

If my company decides to purchase some of HDDSURGERY products, is it possible to get training for our technicians for free?

@Bob We provide free training for the clients who buy all the products. Regards.

What would be the total cost of the kit? Would you also be able to carry out such a training in Nairobi, Kenya where we are based?

@Solomon Send us an email at support@hddsurgery.com for a quote and training information. Regards.